The God of Time! The Ascent of Saturn!

Subaru awakens as Saturn, the God of Time, the one who bestowed the Pallasites their Chrono Tectors and Holy Swords. Donning his own Chrono Tector, Saturn, accompained by Europa and Mira, reveals that he had descended to Earth and erased his past memories to live among mankind and determine their worthiness. Having regained his former self, he then declares that humanity no longer deserves to remain on the Earth and uses his powers to freeze all of its inhabitants, before retreating to his heavenly palace with his servants. Determined to make Saturn pay and have Subaru return to normal, Seiya and the young saints depart to confront him in the sky, but just after they depart, the wounded Harbinger and Titan steel themselves to defend Pallas and Athena when Europa and Mira return to dispose of the goddesses, but Shun and Hyoga appear to fight in their place. 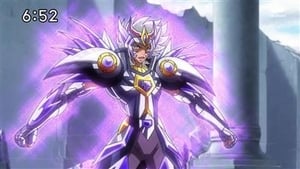