The Bronze Saints investigate what they believe to be the final resting place of Shiryu, Kiki, and Fudou, who sacrificed themselves to defeat Hyperion, but they discover that while the Tenchi Destruction Slash has been destroyed, Hyperion has survived with barely a scratch. Koga and his friends must use their new Omega Cloths to take down Hyperion for good. During the battle, Subaru’s great and powerful Cosmo once again surfaces to everyone’s surprise, along with the proclamation that he is a god. However, after seemingly defeating Hyperion, a strange voice talks to him from within and he starts to lose it until Hyperion launches Subaru into a wall, stealing his time with the Chrono Destruction, horrifying Koga and the others. 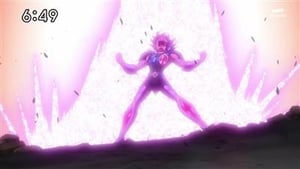