Fighting Destiny! The Confession of Rebellion!

After dealing with Paradox, Gallia turns her attention to Athena and the Gold Saints, easily deflecting all their attacks until she reveals her Photontector. Meanwhile, the other three groups figure out the meaning of their endless running, figuring out that someone has put them into an endless corridor. As Seiya’s attacks are easily deflected, and Gallia is about to kill him, Pallas informs her to stand back, with Gallia mocking Pallas for receiving no love in spite of being the Goddess of Love. However, Integra and Paradox combine their Cosmo, and destroy Europa’s trick with the Another Dimension, allowing the other Saints to reach the battlefield. However, Paradox succumbs to her wounds and dies in Integra’s arms, fulfilling her destiny as the Gemini Gold Saint. 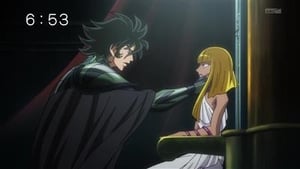