Eden takes over the fight against Fudo after blasting Kouga and the others out of the Virgo Temple. Following a desperate battle, Eden manages to defeat the Virgo Gold Saint when he awakens the seventh sense. At the same time, the other Bronze Saints attempt to use the opening he gave them to go to the Libra Temple. Unfortunately, they are confronted by Tokisada, the new Aquarias Gold Saint and the man who killed Haruto’s brother. His apparent ability to control time makes him a powerful adversary and Kouga is defeated with little effort. 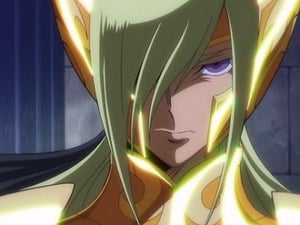