At the Star of Destiny's Side! The Way of Living of a Saint!

Resuming their journey, the Bronze Saints eventually are tracked down by a small cadre of Martians. Running away from them to protect Aria, the teenagers reach a small but lively city, where Yuna fails to purchase a ship ticket as her purse fell during their escape. In order to rise money for ship fare, the Saints eventually find a job thanks to a kind old man who takes them to his wife’s restaurant, where the youngsters prove they are not up to the challenge, much to the woman’s chagrin. Later, the Martians are able to find the Saints and a fierce battle ensues. After achieving victory, the young Saints receive a resounding ovation from the crowd, and are given another chance at the restaurant. 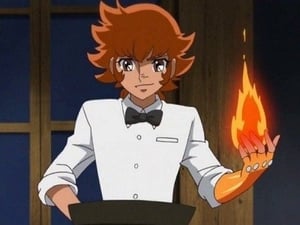